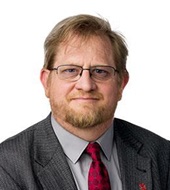 John Dudley is Dean of the College of Arts & Sciences and Professor of English at the University of South Dakota. He served as Associate Dean for Academics in the College from 2014 to 2021, and as Chair of the Department of English from 2011 to 2014. He is the author of A Man's Game: Masculinity and the Anti-Aesthetics of American Literary Naturalism, as well as several critical studies of American literary naturalism, African American literature, and Western American literature. His most recent publications include chapters in A History of American Crime Fiction and Cormac McCarthy in Context, both from Cambridge University Press. His current projects include a book-length study of African American literature and culture between 1890 and 1928, with an emphasis on the role of music, technology, and material culture in developing notions of racial identity.