The town of Bloomingdale, located in northern Clay County along an old tributary of the Vermillion River, was abandoned in 1900 after its mill went into disuse and railroads began to emerge. The group's goal is to learn how much of the buried town is still preserved today to understand life in the Dakota territory during the 1800s. 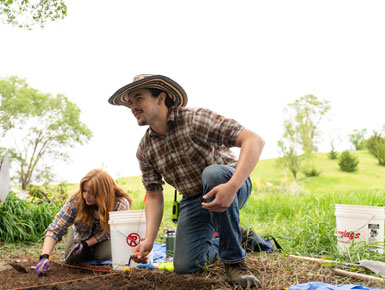 This is Krus's fourth year working on the Bloomingdale project, and the second year where students are included in the process of excavation.

Last summer, they discovered the third-oldest water mill in the Dakota territory at the site, built in the 1860s.

“We know from historical records and anecdotal evidence that the town consisted of a blacksmith, hotel and post office,” Krus said. “We don't really know the number of people that lived in the town or how many residential structures were present.”

This summer, Krus and his students are looking at other parts of the Bloomingdale area to find any remnants of structures to understand what might be present below the ground

“We are coming across some pretty exciting architectural remnants right now, like a really thick thing made of brick and stone that's probably a foundation, which could be a wall,” Krus said. “We also found a structure made of cement blocks from a farm that was present in the area in the 20th century. It's cool for the students to excavate and see how the landscape has changed through time.” 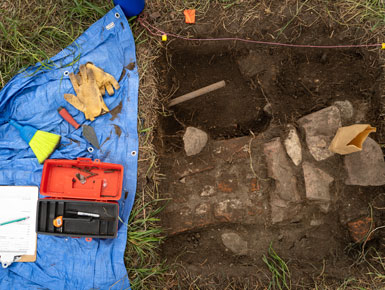 In addition to the Bloomingdale site, Krus and his students traveled to Sturgis, South Dakota, set-up future excavations at Fort Meade and the Bear Butte Creek Historic Preservation Area.

“This summer has been particularly awesome for all the students,” Krus said. “It's exciting and fun for everyone to go through the process of seeing an area that's completely covered by grass and then uncovering a hidden building below.”

Many of the students in this summer's Susan Tuve Archaeological School want to go into careers in archaeology, anthropology or attend graduate school.

Junior Cash Hemmingson is a part of the field school team and has enjoyed the hands-on learning. He hopes to work for the South Dakota State Cultural Resource Management after graduation.

"I want to develop proficient techniques in the field of archaeology, so I am best prepared when I enter the workforce next year," Hemmingson said.