For one University of South Dakota student, what started out as a fun way to introduce others to his hobby turned into a benefit for a local organization.
Topics
Graduate Event
Print
Email
Share

Ryan Hanks, a University of South Dakota physical therapy student, organized a Lift-A-Thon, an event where weightlifters sought pledges based on the amount of weight they could lift. The event, held in April at the USD Wellness Center, raised more than $15,500 for Special Olympics South Dakota. 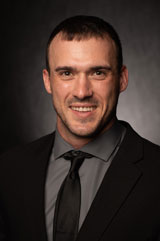 Hanks, an avid lifter himself, has his undergraduate and master's degrees in exercise science and is currently finishing up his second year of physical therapy school. “Being active and promoting strength training has always been a passion of mine,” he said. “I've always been a big advocate of strength training and knew that I would enjoy running an event like this one.”

Each Lift-A-Thon participant recruited donors who pledged to donate by the pound successfully lifted. The highest attempt of each of three lifts—squat, bench press and deadlift—created their total that the donor then paid. For example, if a lifter successfully completed a total of 300 pounds lifted, and a donor pledged $0.10 per pound, their donation was $30.

“USD physical therapy values and emphasizes service engagement, and we promote offering our time and talents to our communities as a professional responsibility,” explained Patti Berg-Poppe, Ph.D., chair of the Department of Physical Therapy. “For the physical therapist, service draws from the core values of altruism, collaboration, compassion, duty, inclusion and social responsibility. Ryan is an exceptional student with a heart for service. His work leading this fundraising effort was characteristically enthusiastic, and we’re proud to see his team’s success.”

Of the event’s 33 competitors, three were Special Olympic athletes and two competed remotely. “There was a huge group of spectators, which was awesome to see,” said Hanks. “The entire gym was loud and full of energy. I had no idea it was going to get this big. While I may have organized the event, it became much larger because of a group of incredible people who participated. It was an awesome experience.”