Established in honor of Keith Nolop, M.D., a 1975 USD biology graduate, the Nolop Institute for Medical Biology enhances the experience of outstanding undergraduate students majoring in medical biology at USD.

The Nolop Institute for Medical Biology provides support for medically-oriented research and undergraduate students who are majoring in medical biology and plan to attend medical school. Each year, the USD Department of Biology awards a fully-funded academic scholarship to an incoming medical biology student. The institute also gives monetary assistance for medically-oriented research by undergraduates in the form of support for supplies and student travel to scientific meetings to present results. The Nolop Family Research Laboratory supports this work with cutting-edge equipment.

In support of faculty members, the Nolop Institute funds two endowed professorships—the Nolop Distinguished Professorship and the Nolop Professorship—awarded to scientists recognized for their contributions in fundamental or applied medically relevant research who teach in the medical biology program.

Two endowed professorships are awarded to scientists recognized for their contributions in fundamental or applied medically relevant research who teach in the medical biology program.

A faculty member in the USD Department of Biology since 1991, Summers also holds a joint appointment as a professor in the Division of Basic Biomedical Sciences in USD’s Sanford School of Medicine and holds an appointment with the Sioux Falls VA, Veterans Affairs Research Service. A fellow of the International Behavioral Neuroscience Society, he has published more than 100 peer reviewed scientific papers. Summers’ medically relevant research includes his current project that explores the development of a new method to reduce anxiety and depression through activation of certain receptors in the region of the brain that modulates fear conditioning and stress. His work is funded by a grant from the National Institute of Mental Health. Summers’ research achievements been made possible by several students graduating with M.S. and Ph.D. degrees in his lab. A two-time winner of the Belbas-Larson Award, USD’s premier teaching honor, Summers has supervised more than 150 undergraduate researchers in his laboratory, many of whom have gone on to careers in science and medicine.

Swanson joined the USD Biology Department in 1990. He is currently the director of the Missouri River Institute and has held recent visiting positions at the Center for Advanced Studies in Ecology and Biodiversity, Departamento de Ecologia, Pontíficia Universidad Católica de Chile, Santiago, Chile, and at the Department of Animal Physiology, Institute of General and Molecular Biology, Nicolaus Copernicus University, Toruń, Poland. His medically relevant research involves metabolic diversity, physiological flexibility, muscle growth regulation and environmental adaptation in animals. His work has been funded by grants from the National Science Foundation, among other funding sources. Swanson has supervised research programs for several M.S. and Ph.D. students and numerous undergraduate students in his lab, and these students have greatly contributed to his research program. Swanson regularly teaches histology and environmental physiology courses for the medical biology major.

This program provides opportunities for summer research for outstanding undergraduates under the guidance of a faculty mentor. Eligible research projects will investigate topics with relevance to medical applications, and may include research in the fields of genetics, physiology, neuroscience, or cell and molecular biology, among others. The Nolop Summer Research Scholars will work with faculty in biology, biomedical engineering, or basic biomedical sciences.  Students will receive approximately $5,500 as a stipend and a research budget of $1,000. Annual deadline: late February.

To apply, applicants will need the following:

Please provide a two-page description of the proposed project, prepared with the guidance of the faculty mentor) as a separate MS Word or PDF document. This description should address the following questions:

Please include an itemized list of your expected budget needs for the project (in addition to the two-page description).

Please ask your faculty mentor to write a letter of support for this project. This letter should address the following topics:

Keith Bradley Nolop, M.D., had a distinguished career of over 25 years in drug development from conception to approval with a focus on allergy, asthma, and cancer products. His work included the blockbuster drug Nasonex, a groundbreaking melanoma treatment, and highly-engineered cancer therapies. He studied biology at the University of South Dakota, where he was editor of The Volante newspaper and a member of Delta Tau Delta fraternity. He was elected to Phi Beta Kappa as a junior and graduated summa cum laude with a Bachelor of Science degree in 1975. His next stop was Vanderbilt University School of Medicine where he graduated first in his class. After receiving his Doctor of Medicine, he began a career in medical research and drug development. He died in May 2016 after a bicycle accident near his home in Pacific Palisades, California. His family honored Keith’s life and legacy by creating the Nolop Institute for Medical Biology from his estate.

“Keith was a celebration of what an individual can do in the science field and contributing to society and humanity,” said Keith's brother Bruce, a 1972 graduate of USD and former chief financial officer of E*Trade Financial. "He lived that dream."

Research, explore and experience the study of life from the molecule to large biomes in the Department of Biology.

Housed in the state's only medical school, the Division of Basic Biomedical Sciences creates an environment of innovative and interdisciplinary research aimed at examining human disease.

Recent Nolop Summer Research Scholars include Kylie Christiansen, Morgan Eikanger and Emily Eisenbraun. Christiansen, a native of Rapid City, South Dakota, examined protein-protein interactions and identified the genes associated with flight muscle aging and senescence in hawk moths. These insects give insights into similar processes in humans and other organisms. Eikanger, a New Ulm, Minnesota, native, tested whether a plant-derived anticancer molecule can suppress cancer stem cells that play a key role in colorectal cancer in humans. Eisenbraun, a Rapid City, South Dakota, native, focused on understanding the impact of the mineral selenium on the immune system of wildlife. Selenium is a heavy metal that occurs in low concentrations in the environment but can be harmful to animals and humans when it increases in concentration.

Hear from a Nolop Scholar 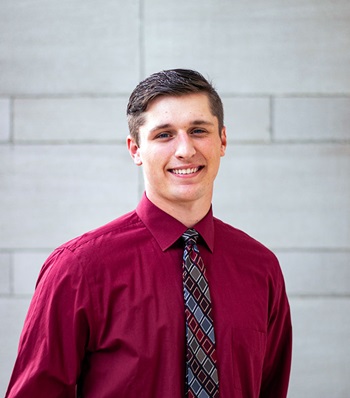 Being the inaugural recipient of the Nolop Institute for Medical Biology Scholarship is a huge honor. The educational opportunities and financial help that the scholarship provides has been pivotal in helping me exceed in my undergraduate education.