Do you see yourself as a leader amongst your peers? Make an impact on campus by running for student government. Through cooperation and leadership the Student Government Association  promotes the best interests of students and the university.

What is Student Government Association (SGA)?

As the liaison between students, administration, faculty and the South Dakota Board of Regents, Student Government Association (SGA) works to enhance communication, understanding and cooperation throughout the university.

One of the responsibilities of SGA is to allocate money each year to student organizations that provide cultural, recreational, educational and social opportunities outside of the classroom. At the same time, we work with university faculty, administration and students to address important campus issues. Contact us to learn how you can be involved with SGA at SGA@coyotes.usd.edu.

Do you have questions about SGA or want to learn how you can become part of this impactful student organization? Feel free to contact one of our executive team members.

Ally Feiner, a junior, is a Political Science and Criminal Justice double major from Mitchell, S.D. Ally is involved in a number of areas on campus. She is the events and fundraising co-chair for Dakotathon, VP of membership and programming at Alpha Phi, and an Arts & Sciences Ambassador. She was elected after serving one term as an at-large senator, as well as another term as an Arts & Sciences senator where she chaired the Internal Review Committee. Within her term, she hopes to create a more transparent and approachable student government to students.
Alexandra.Feiner@coyotes.usd.edu

Katie Brust, a senior, double majors in Graphic Design and Biology. She was elected after serving as Director of Communications, and a Senator for the College of Arts & Sciences. She enjoys working as an independent artist, an Honors Resident Assistant within Housing, and Research Assistant within the Biology Department, while being a part of several organizations on campus, including Kappa Alpha Theta, Honors Association, and a USCSA national rep for alpine skiing.
Katie.Brust@coyotes.usd.edu

Addison Miller is a junior Political Science major, with minors in Business Administration and Nonprofit Studies. He was nominated after having served one year on the SGA Senate, and after being twice elected. Addison spends his time in a number of roles. He works as a resident assistant in Burgess/Norton, is the director of the Get Out the Yote initiative, the Vice President of the Political Science League, the Eastern Regional Director of the College Democrats of South Dakota, the National Committeeman of the Young Democrats of South Dakota, and more. Also, he's a self-described "MarioKart fanatic."
Addison.Miller@coyotes.usd.edu

Logan Johnson, a senior, majors in Business Administration with a minor in Legal Studies in Business (with Honors). He served two terms as an at-large senator. Outside of SGA Logan serves as a Dean's Ambassador for the Beacom School of Business. He serves as the Director of Recruitment for the Pi Kappa Alpha Fraternity, and Sponsorship Chairman for Dakotathon. Logan has also interned at Weisser Distributing for the last 4 years in accounting, sales, and purchasing.
Logan.G.Johnson@coyotes.usd.edu

Paige Schroeder, a senior, double majors in Political Science and Philosophy with a minor in Nonprofit Studies. On campus Paige is currently a research assistant for the Political Science Department. She has previously served as an at-large senator for SGA and was a part of the Mock Trial team last year. Off campus, Paige has interned for the South Dakota Legislature and a social justice based program called Micah Corps.
Paige.Schroeder@coyotes.usd.edu

The Finance Committee recommends action to the full senate on all SGA special appropriations - money appropriated after the spring budget process. The committee also recommends approval or disapproval of requested reallocation of funds within student organization accounts.

The Government Affairs committee is responsible for building community and university relations, maintaining contact with alumni, communicating with the South Dakota Student Federation, and handling issues related to Board of Regents meetings.

The Student Affairs Committee is responsible for ensuring the effectiveness and efficiency of student services, maintaining positive relationships between SGA and the Office of Student Life, reviewing student organization constitutions, and working with student organizations to gain recognition and funding.

The Internal Review Committee is responsible for identifying and communicating student concerns to the student judicial process, reviewing all amendments to the constitution and bylaws, and holding our members accountable.

SGA's bills and resolutions, governing documents, meeting agendas and minutes can be accessed through the SGA's public Google Drive. If you have any issues accessing the drive, contact the SGA office at sga@coyotes.usd.edu or 605-658-3584.

For questions, email our business manager, Aaron Mallinger at Aaron.Mallinger@coyotes.usd.edu.

The large number of organizations allows students to connect with a group of peers with similar interests. When coupled with the dedication of its student members, the campus culture is greatly enriched. Student organizations have a real and profound effect on the university and the outside world through their vision, goals and accomplishments.

To register an organization on campus:

Organizations determined to be a club sport must be active for one year before applying for funding. Funding for these organizations is provided by campus recreation.

Each organization will be reviewed every 3 years by the SGA Student and Internal Affairs Committee. The review is to assess if the organization is operating consistently with the way it was intended and to assist with any problems the organization may be having. If an organization chooses not to participate, their privileges may be revoked.

Only recognized, funding-eligible organizations are eligible to participate in the budget process. All organizations must send a representative to the Leadership Development Seminar each spring to remain eligible for SGA funding. Budget hearings for the organizations will be held in early April.

The Green Initiative Fund gives USD students the opportunity to enhance our campus by implementing innovative projects that reduce waste, decrease greenhouse gas emissions and motivate continued progress toward a sustainable campus environment. The fund helps provide support and guidance for students who want to make a lasting impact on campus. All ideas are encouraged and all students are welcome to apply. Submit any project ideas you may have for the Green Initiative Fund on Coyote One Stop.

What is the Green Initiative Fund?

The President’s Joint Committee on Sustainability reviews all project proposals and makes recommendations on how to award the funds. SGA senators serving on the Committee bring the recommendations to the full SGA Senate, and then Senate votes on the final decision. Multiple projects may receive funding each application cycle. Funds are to be used within a single fiscal year: July 1st through the last day of the spring semester final exam period.

How did the Green Initiative Fund start?

The Student Government Association (SGA) started the Green Initiative Fund (GIF) in April 2016, and the first funds were spent in fiscal year 2017 to start the campus bike share program.

How much is the Green Initiative Fund?

Each spring semester, SGA allocates funds to the GIF through the annual budget process, which requires the full SGA Senate to pass a bill approving the SGA budget for the fiscal year beginning in July. The Senate typically allocates $5,000 to the GIF, but the amount can vary. These funds come from the General Activity Fee (GAF) paid by students.

What types of projects can be funded?

Examples of past projects include:

Examples of future projects include:

Students have the opportunity to apply for the Green Initiative Fund in both the Fall and the Spring semester. Start by submitting a pre-proposal. Selected pre-proposals will be given feedback and asked to submit a full project proposal for consideration. Please see the timeline for deadlines.

If you are interested in running for senate, please refer to the step-by-step process below.

Your college is dependent on your major. If you have two majors in different colleges, you can choose the college in which you want to run. Undecided majors must run in the College of Arts and Sciences.

2. Determine the number of petition signatures you will need

Consult the table below to see the number of available seats in each college and the number of signatures you need to be eligible to run. Download the election petition form or pick one up in the SGA office.

Voting starts March 2 and ends March 3 at 5 p.m. Student vote via the myUSDportal.

Any Questions? Email SGA@coyotes.usd.edu or stop by the SGA Office MUC 143.

The Student Government Association funds a local attorney to assist with student legal needs. Student legal aid is available for all current students attending the University of South Dakota. Legal aid services are provided by Kasen Lambeth, attorney at law. You can contact Kasen at kasen@lambethlawoffice.com or 605-228-7013. 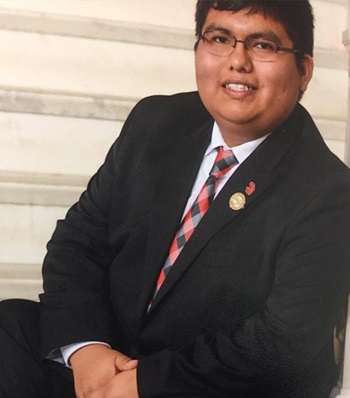 One of my favorite memories at USD was being apart of the Student Government Association and going to Students for Higher Education Days in Pierre as well as Board of Regent Meetings. It was great to have met so many people.