Since 2019, Holly Black, a senior double majoring in biology and sustainability, has been involved in a project to help with tick surveys in eastern South Dakota.

“I have always wanted to combine my interest in the environment with the medical field, and this project was the perfect opportunity to do so,” Black, a Rockton, Illinois, native, said.

Over her seasons of research, Black has collected hundreds of ticks, including the discovery of two important tick species: the black-legged tick and the lone star tick. The black-legged tick has only been seen sporadically over the last several decades in the state, and the lone star tick had never been recorded in South Dakota before. Black also documented the presence of breeding populations of both ticks in several locations based on Centers for Disease Control and Prevention (CDC) criteria.

“Tracking tick populations and monitoring for disease helps inform the public health department and keep recreation areas safe for us and our pets,” Black said.

Black used a flagging method to collect the ticks, then she identified the species, life stage and sex of each tick in the lab. Her results, in combination with other recent findings, indicate that the range of the lone star tick is expanding, possibly a result of climate change. 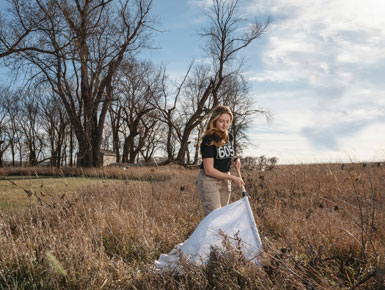 Additionally, as a part of her research, Black worked in the lab of José Pietri, Ph.D., a microbiologist in the University of South Dakota Sanford School of Medicine. While working in the Pietri lab, Black discovered the presence of Lyme disease in several of the ticks she collected.

Black’s work was accepted for presentation at the annual meeting of the Entomological Society of America in November 2021. She is also the lead author on the paper titled “Establishment of Amblyomma americanum populations and new records of Borrelia burgdorferi-infected Ixodes scapularis in South Dakota,” which was accepted for publication in the May 2021 edition of the Journal of Vector Ecology.

“Publishing my findings in the Journal of Vector Ecology is by far the highlight of my undergraduate career and one of my biggest accomplishments,” Black said. “I have made a genuine scientific impact with my research that will benefit South Dakota and contribute to the body of literature of this area.”

Black was also a 2021/2022 recipient of the Undergraduate Research Award.

After graduation, Black hopes to attend veterinarian school and pursue a career related to public health and research.